I just read this one over, posted a few years ago but still so typical and still exactly the same thing, over and over and over. Not much has changed here, still spilling my food although a lactose intolerance thingy has me avoiding ice cream at the moment. So today I made caramels instead of ice cream. Got interrupted in the middle of cooking them so not so great this time. They will be devoured though even if I have to provide a spoon to go with them. Time will tell.

Doll clothes are still being made but this time they are mainly for Barbie. And I’m working on a special quilt at the moment, a small one for my granddaughter’s wedding gift. Three more weeks until the wedding, or just over three weeks, but very soon. Now lets see if I can insert a couple of my Barbie photos here.

I have acquired a few more Barbies here.

Okay, back to the past which also seems like the future.

So it’s a good thing I’m such a stubborn woman!  I just checked in Facebook and found one of my memories from 3 years ago.  In it I was bemoaning the fact that this laptop and I were not getting along well.  We still aren’t!  I think the problem is still the same.  I try to free up space on the drive and then immediately fill it up again.  I’m a collector, hoarder, lover of photographs and apps and dolls and floral arrangements and sewing and quilting and pretty fabrics and — hmmm, I can’t think of much else off hand.  Good thing though.  I was holding my breath while typing that and I think my complexion is now kinda bluish.  Of course some of that could also be due to my sinus problems that seem to increase as the day wears on.  Gonna have to get busy inventing that sand blaster for sinuses.

I’ve been trying to finish some of the latest doll clothes but keep getting side-tracked by life today.  When I say by life what I actually mean is that I’ve been falling asleep every time I get settled back in my chair with needle in hand.  Wouldn’t be so bad if I didn’t also have food and drink in my lap at the same time.  You just can’t imagine how much I dislike having to launder things before they are even hemmed!  Even worse when I have to toss my clothes and the blanket covering my legs in there at the same time.  And when I think of all that lovely food soaked into everything but my taste buds!  It’s a shame.  Today it was a bowl of homemade vanilla ice cream with strawberries and chocolate syrup on it.  Not only is it sticky and messy to climb out of the clothes that are wearing my snack, but such a waste of deliciousness!  Is that even a word?? It’s not underlined in red so I guess it must be.   Not sure but I think I even got some in my hair!  And I have a damp spot on my turtleneck so I must have done some drooling in the process.  Gotta tell you, growing old and even older by the second stops being appealing after 75.  Ya feel like you have accomplished something when ya hit the quarter century mark but after that it’s not that great.  Drooling, dropping everything ya pick up at least 5 times before getting a holding grip on it, finding some of the straight pins and needles when you either step or sit on them….it all loses it’s appeal after the hundredth time and even becomes boring!  I can say that because I only have one brain cell still active and it seems to be the one that controls the feeling of pain! Pretty sad when you are being stuck by needles and pins and don’t even know it.

Another flash back occurred when I read a weather advisory this morning.  We are again under a flash flood watch!  Just like this time last year — and the year before, and the one before that!  Makes me feel water logged up here so far from that ground.  This is the year I will definitely ask one of the kids to bring me a few tree trunks for that ark I keep talking about building.   I’m beginning to feel like Tim the Tool Man.

Wonder what photos I can find for your entertainment tonight.  Well, here goes practically nothing — except my blood, sweat and tears from several months ago. 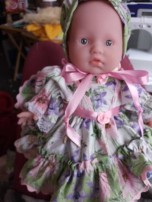 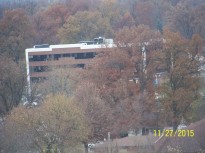 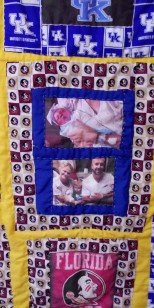 Another doll and another baby quilt delivered this past Christmas — the quilt, not the doll.  That is MINE!  I love playing with my baby dolls!  Not I’m going off to throw a tantrum — after I throw some food in a pan for another try at nourishment!  A.

Just when I thought my computer woes were behind me I hit a button, and in my case it could be any button because I’m not sure which one did it, and once again my computer screen went blank.  I found it again just a few minutes ago, not sure how or why, but here it is — at least for the moment.  Sometimes I think I’m either a complete idiot where this machine is concerned, or a computer genius with the ability to keep it running without ever knowing what I did to fix it all.  The only thing I know for sure is that is is free of viruses and other little bugs, because I ran a scan and fixed ’em all earlier today.  Hmmm, that could very well be the problem.  Each time I “fix” it lately it erases everything on the screen.  Maybe my best bet would be to stop fixing stuff.  Not sure if that would make it work or just make it all boring.

Mercy goodness, I just looked at the clock and it is well after midnight, Jan. 2, 2018 here.  It seems strange to write that number already.  My brain cell is still functioning on last year’s time — last June, to be exact!  And after sleeping most of the day to make up for being awake most of last night I once again have my days and nights mixed up.  Big sigh!  Just when I thought the insomnia and whatever it is that makes me want to stay awake all night and sleep all day were under control.

Today I spent a few hours putting a lot of the Christmas decorations away.  My Nativity scene is still out and will be for a few more days, the lights in the window are still on, but that won’t last much longer.  Maybe.  I do enjoy looking at them all night so it’s a tossup whether they will ever be unplugged for the year.  One gift remains unopened, waiting for a visit from the recipients to pick up, but I made sure I like everything in the package in case my sweet baby forgets to stop by to visit his sweet Mom (that would be me!)  He’s terribly overextended time-wise, plus he’s a lot like me when it comes to visiting people.  Once I get myself motivated, and if I’m still able to function by the time I am ready to go, all is well.  It’s the getting ready that makes me stay at home though, plus the choking problem I continue to have.  I can handle it here but in a different situation it’s not always easy.  Guess I just don’t want anyone watching when it happens. 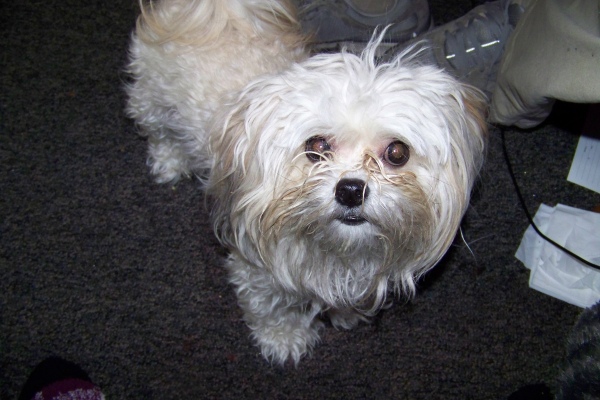 Another photo of Tessa, a frequent visitor, asking me when I’ll stop what I’m doing and pay attention to her.  Who can resist a face like that?  Have a good week everyone.  A.

3.2.1. Quote Me Almost Back A Near Miss So Far Another Day Another Opportunity ANOTHER DAY IN THE LIFE A Pain in the B**t A Sky Full Of Angels A Story About Love A Strange Place For Those. A Study In Frustration Again Awards (1) Back Again Brain Freeze Can't Think Of A Snappy Tital Frustration Giving Is A Way Of Life in Owensboro, KY I've Gone And Done It Again If We Don't Visit Again Just a few words Looks Like I Did It Again Mem'ries Light the Corner, Blah OH, NO! Oh The Sun Is Shining On This Old Kentucky Home Pearl Harbor Day Pretty Boxes a Pretty Boxes and Other Nonsense Shopped Til I Almost Dropped The Sunshine Award, Part I The Sunshine Award, Part II Uncategorized
Loading Comments...