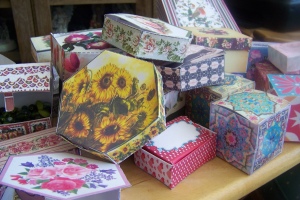 One fine day as I was tiptoeing my way around Pinterest I stumbled upon some templates for boxes. Since I didn’t have enough stuck in every bare spot of the apartment already I started printing some of them out.  All Christmas related at first, as soon as Christmas was over it only seemed right to print out some for all other seasons.  After blundering my way through the first thousand or them I have finally figured out how they are supposed to look.  So, maybe some day in the future I’ll figure out a good way to make them actually look that way, but for now I’m using a bucket of school glue and a crate of shipping tape to sturdy them after they are finished.

These are my personal favorites, but for each one of these there are two more that will be foisted onto a friend on each visit.  For me the boxes are just right to hold the materials needed for one project at a time.  The fact that they hold large amounts of beads, screws,, and other small items until they are used in some project or another.

Somehow I got back into jewelry stuff.  Just pulled my pliers and a few other things out to repair a necklace and the next thing I knew I was working with the whole shooting match again.   One thing of beads, two things of beads, some chains and findings, another necklace that had a couple of things I likes and more that I didn’t like and felt the need to revamp them just led to something else.  The following photos present some glare because of the backdrop — a large box they will live in when not being worn, more necklaces I found for $1 in different stores and now all I need are some new hands. I’ll accept almost any offer, right hand would be most appreciated, aw come on now, surely someone out there has an extra hand they want to trade, lol.  (Just had an awful thought here.  Don’t take that seriously please.  I really DO NOT need packages filled with hands arriving at my door.)  Just that this cold weather makes already stiff joints turn to cement, provided you can find cement that has joints that let their presence be known each time you flex the fingers.  Haven’t found any gold in these golden years but there are so many rusty hinges it loses its appeal.

Some of the necklaces I revamped by taking some components from several old pieces and combining them into one.  Or three. 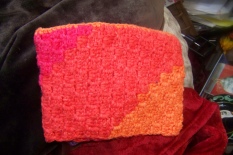 I also got my crochet hooks and knitting needles out again.  Both of these are made from the same ball of yarn, a self striping one from Bernat called “Pop”.  My son and daughter-in-love gave me a neck warmer for Christmas and I fell in love with it.  The only problem I have with the concept is that one just isn’t enough!  They fit just right around the neck which makes them perfect for sleeping in a drafty room.  It only takes a few hours to make one, so I’m back hooking again.  Except for the hat — a first effort with 5 double point needles, and this one looks great from a distance.  A closeup makes every dropped stitch that i picked up in the wrong place glare at everyonel

I guess this weather we are having is a good thing for me, now that I think about it.  At least by starting up with some of my old hobbies I’m staying busy while remaining inside where it is warmer, and it also keeps me off the street corners at night.

3.2.1. Quote Me Almost Back A Near Miss So Far A New Day And Hope Another Day Another Opportunity ANOTHER DAY IN THE LIFE A Pain in the B**t A Sky Full Of Angels A Story About Love A Strange Place For Those. A Study In Frustration Again Awards (1) Back Again Brain Freeze Can't Think Of A Snappy Tital Frustration I've Gone And Done It Again If We Don't Visit Again Just a few words Looks Like I Did It Again Mem'ries Light the Corner, Blah OH, NO! Oh The Sun Is Shining On This Old Kentucky Home Pearl Harbor Day Pretty Boxes a Pretty Boxes and Other Nonsense Shopped Til I Almost Dropped The Sunshine Award, Part I The Sunshine Award, Part II Uncategorized
Join 184 other subscribers
Loading Comments...